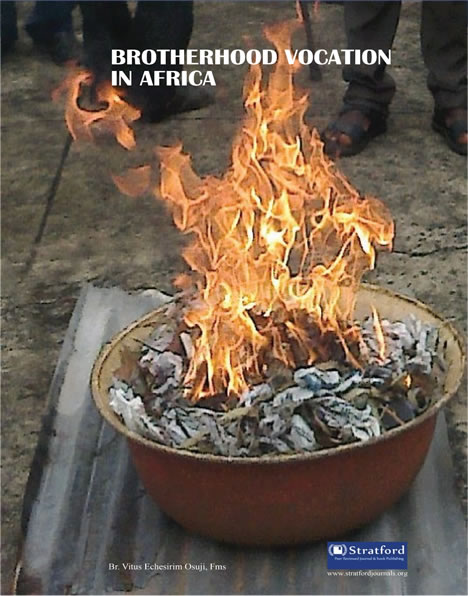 Reviewed by: Stratford Peer Reviewed Journal & Book Publishing. To get a copy of this book: Contact author on email: vieosa@gmail.com

Meanwhile, the dynamics of religious life are more of the combination of secular education and the learning of the particular Institute Founder’s charism and spirituality as approved by the Church. This involves personalized training or formation of the individual young men God sends to the particular institute. The delicate and personalized work requires the capacity for discernment, listening, proximity, and intense spirituality. All these attitudes help the candidates to Religious Brotherhood to mature humanly, spiritually, and charismatically. It is a delicate and demanding task. The author, in this book, painstakingly tries to explain the meaning and the challenges of being a Religious Brother in an African context to enable those in charge of training the candidates for Religious Brother’s life to make it not only culturally relevant but also gospel-centered.

To be a Brother in Africa is first to accept being a gift of the Holy Spirit to the Church and the world and then dispose oneself to be transformed by the grace of God to become a living witness of his merciful Love. It demands personal configuration with Christ since the goal is to effectively engage in and actualize the great and noble Divine Project of building the Kingdom of God, which Christ the Divine Master Himself started. In other words, to be a Brother in Africa is to assume the person of Christ and become another Christ in a way that makes meaning to the people of Africa. There is a particular similarity between Christ’s earthly private life and the Religious Brother’s lifestyle. Therefore, to be a Brother in Africa is to accept to be a manifestation of the presence of God who, in Christ, humbled Himself to take the form of a slave to reassure His children that He is a loving Father who understands and shares in their predicaments.

To be a Brother in Africa is challenging but possible when the individual is personally and spiritually matured enough to resist the attraction of the modern world and the demands of the African culture. Neither academic qualification nor good will to serve the Lord, nor job excellence nor social recognition can sustain a person in the Religious Life; spirit of detachment and self-transcendent the ocentric love only, can.

In this book, one discovers that Religious Brotherhood is a unique vocation and the uniqueness does not lie on its be ing a special vocation but on the exact resemblance of its lifestyle to the private earthly life Christ lived, which manifests in community life and the profession of the three evangelical vows of chastity, poverty, and obedience. In other words, the Religious Brother’s life is the summary of the Christian love. Hence the emphasis on fraternity (at the intra- and inter-cultural levels) and material detachment, in the training of the Religious Brothers.

The keynote of the preaching of Christ is love, which he manifested concretely by forming a community with his twelve apostles. The psalmist puts it; thus, “Yes, it is good; it is sweet for the brothers to live together and be united” (Ps 132: 1). Moreover, “Look how they love each other.” Tertullian commenting on Acts 4: 32-35, says anyone who carries Religious Brotherhood vocation must show that the calling of humanity to communion and unity is not only possible but also in action.

Perseverance in the Religious Brotherhood vocation in Africa, in the one hand requires letting oneself to be carried away by the wind of the Holy Spirit and to have as one’s vital joy only the one the same Holy Spirit gives. On the other hand, it involves the realization that work does not define the Religious Brother rather how he does the work defines him, which portrays Religious spirituality. Perseverance requires also carrying ones cross every day and following the Master being aware that “the best is coming only at the cost of great pains” and that “it is necessary to go to the end of one’s sorrow to light hope like a fire”.

1 review for Brotherhood Vocation in Africa