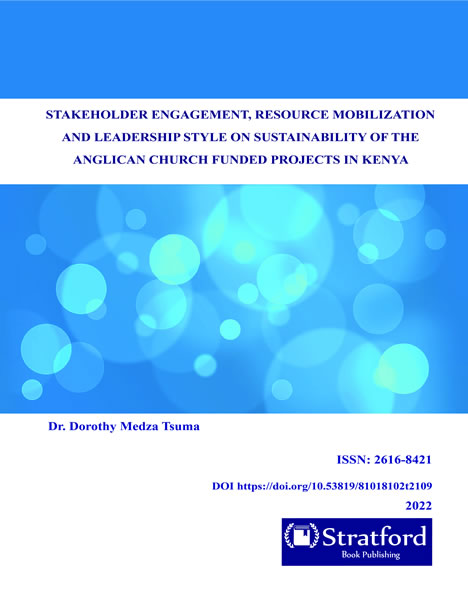 Reviewed by: Stratford Peer Reviewed Journal & Book Publishing.
To get a copy of this book: Contact Stratford Publishers
Email: info@stratfordjournals.org or The Author Email:

Reviewed by: Stratford Peer Reviewed Journal & Book Publishing. To get a copy of this book: Contact stratford on email: info@stratfordjournals.org

Churches play a critical role in the alleviation of socio-economic challenges of people in various places of the world through church funded projects. In Kenya, for instance, Anglican Churches invest huge resources each year in the sustainability of income -generating projects. These projects include provision of education, healthcare and food. This is done alongside the Church’s core function of the spiritual nourishment of its members. At times, Church-funded projects are brought to a sudden halt with the transfer of an individual minister in the church or after the demise of donors or withdrawal of funds by donors. These circumstances lead to serious sustainability challenges of projects such as quality assurance or the overshooting of estimated project cost budget. It is against this background that this study was designed. The study sought to assess the influence of stakeholder engagement, resource mobilization and leadership style on the sustainability of the Anglican Church-funded projects in Kenya.

The study was anchored on stakeholder engagement theory. The study adopted a positivism philosophy and a cross-sectional survey design. The unit of analysis was the Anglican Church while the universe of the study was Mombasa Region in Kenya. Stratified random sampling was used to select 397 church members while purposive sampling was used to select 11 church committee members and 22 parochial church councils. The primary data was obtained using structured questionnaires. The study achieved a response rate of 95.81%. Data was analyzed using descriptive and inferential statistics. The findings indicated that stakeholder engagement positively and significantly influenced sustainability of church funded projects.

The study therefore concluded that the completion of projects was above average at 87% in the years 2016, 84% in 2017 and the rate for the year of 2018 was 86% respectively. This success rate led to a higher level of satisfaction by the beneficiaries of the church projects. However, a budget variation was noted in small projects which had a budget variation of less Ksh 500,000 while major projects had variations of between Ksh 500,000 and 1,000,000 for the three years under study. As part of the recommendation, adoption and application of democratic and transformational leadership practices was advised.

The leadership of the church should motivate members to unremittingly participate in project implementation cycle and provide regular and progressive feedback to members and other stakeholders. This is useful in orienting development projects towards objective realization, helping church members get on track and stay focused, enhancing familiarization and in enhancing overall project sustainability. The study will inform policy to church policy makers, Church authorities and stakeholders.

1 review for Stakeholder Engagement, Resource Mobilization and Leadership Style on Sustainability of The Anglican Church Funded Projects in Kenya